All work and no play

You know what they say about all work and no play. If it makes Jack a dull boy I'm sure that it would have the same effect on us girls as well. Not being the type to take risks I took a little break while at work the other day and did some playing.
One of the girls I was working with knocked a couple bowls off the table and they landed on the floor behind me. I turned around and they were laying there right next to each other and I made the comment that they looked like a snowman. Karleen pointed out that it needed a head so she grabbed another bowl and laid it on the floor. Then he needed some arms so I grabbed a couple pieces from the rotisserie. No self respecting snowman would be caught without a hat so we added a colander. Of course the weather outside is frightful so he also needed a scarf. We grabbed one of the rags off the sink and he was properly attired. Something was missing though. Oh I know, head to the salad case and grab him a nose. I know snowmen usually have a carrot nose but this is no ordinary snowman so he shall have a jalapeno pepper nose. 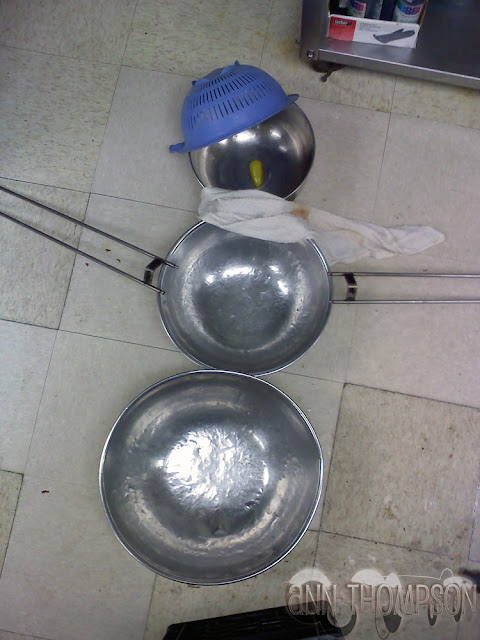 I guess I'm safe from dullness for another day.
Posted by Ann at 7:00 PM

Haha ~ oh how creative you are Ann! Sometimes we have to add a little fun into our work day wherever we can get it!

That is too funny ! I love it. Thanks for sharing a smile.

What a good snowman, still giggling. You have to have those moments to make work fun and give you a good laugh later.With that pepper for a nose we might have to cal him,Mister muñeco de nieve, Mister Snowman.Keep it up!

Oh my gosh, this is too cute!!!! He is rather rakish and stylish looking! I think all the snowwomen will be after him for the cool blue hat with the head ventilation!

Love, love, love your whimsy! Made me smile.

You don't drink at work do you? Bwahahahahaha. Just kidding. You have to do something silly sometimes just to make it through the day. I so remember.

I like it! It's always great if you can have fun at work :)

Is it that you really have went and plumb lost it now or that you are just now getting around to letting us know how bad it has got?

HaHaHa - that's terrific! A great way to break up the monotony of the work day ;o)

That's so cool! You can never have too much fun :)

That was a great snowman. Of course no one but you would have dreamed up the idea. You are very creative. Thanks for the laugh.

LOL at Sandee and her remark. Ann, I swear I think you could take anything and turn it into something fun and interesting!

I am going to check into some of these craft projects you do. I would love to learn how to do some of them for Christmas present for the kids and grandchildren next year.

Yes, probably another expensive habit I will obtain!!

Hope you have a great Sunday!
Jackie:-)

I won't send them the snowman though. I want to learn and try to understand quilling.:-)

sandra claus ho ho hoed out loud at this one, first of all it is CUTE and second that grown ups were playing. I love it.

Every work day needs some lightheartedness thrown in, if you ask me - cute idea!

Love how your mind works!!

Perfect snowman! You couldn't do that again if you tried!

I LOVE it! Guess y'all are really busy this time of year. Playing keeps you sane.:)

That is hysterical Ann but oh so clever. Great snow man especially the nose. That is just terrific. Good thing you have such an artist's eye. Who else would have thought of a snowman in pans. Take care and have a great evening.

I like the way you think! A most adorable snowman!

Thanks for the comments everyone, Glad you all enjoyed my little play time :) I've been busy baking all day so in the interest of catching up on things here I'm just leaving one comment. You guys are the best

You are too clever! hahaha

I love this guy! You must be a total blast to work with!!

Dss, I have my moments

marie, oh my there are several people at work who would so NOT agree with that...lol