Saturday we took a short trip to Geneva Ohio for the Great Lakes Medieval Fair. Last year I was so mad at myself because I didn't take spare batteries with me and mine died after about 6 pictures. This year, I was prepared. Not only did I take both cameras with me but I had spare batteries also. I took tons of pictures, or so I thought. I got home and went to pull the card out of my sony. OH NO!!!! No card in the camera. That camera doesn't have an internal memory so I didn't get a single one on it. I can't believe that I didn't notice. Luckily the battery died on that one about half way through the day and I switched to my old camera. At least it wasn't a total loss.
We saw shows but I only have pictures of this one. Too bad, because the washing wenches are hysterical and the naughty baudy babes were pretty good too. 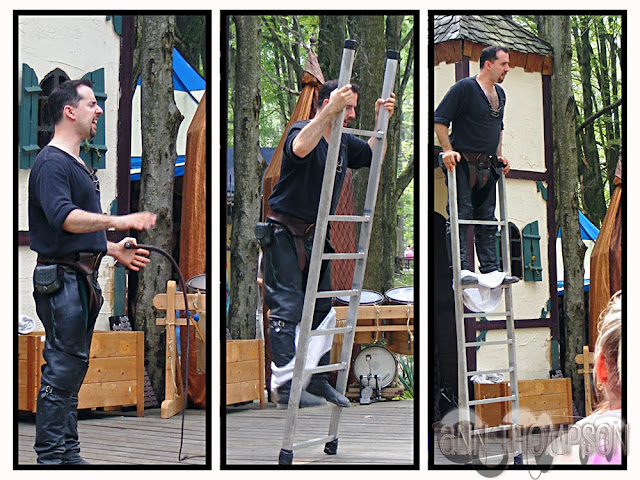 Here are a few of the vendors doing what they do best. 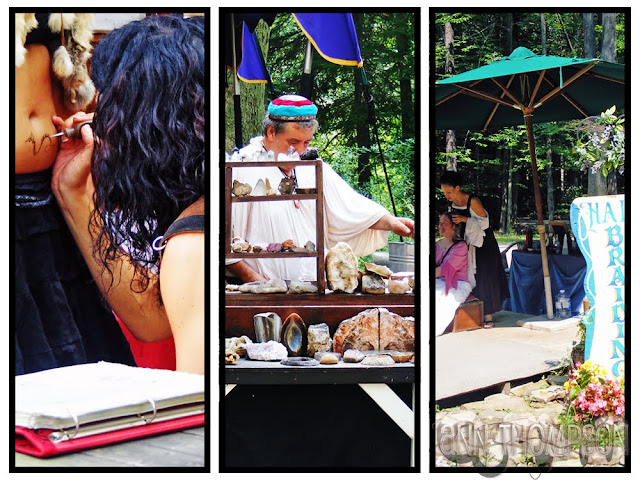 I just couldn't help taking pictures of all the people dressed in costume. Some were very accommodating. The guy in the first picture stopped to let me finish taking the picture. Some were not so pleased like the guy in the center picture who appears to be covering his face. And some were totally unaware of my camera. The guy standing in the third picture is the Sot. He does a very amusing drunken show. 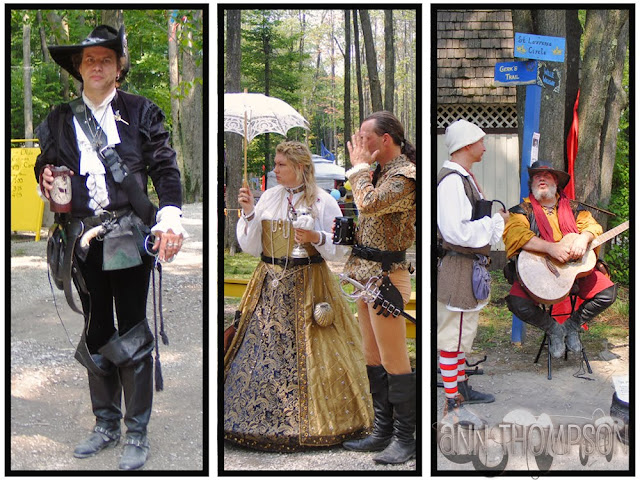 There were plenty of places where you could purchase costumes of your own. I think it would be fun to dress up to go to one of these things but after looking at the prices I'll just settle for the pictures. 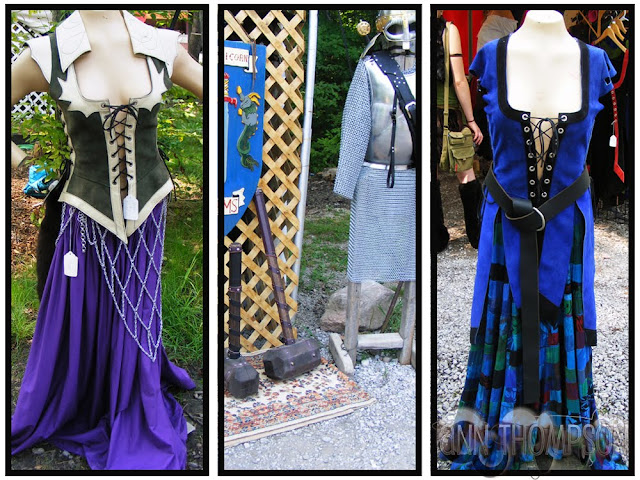 I'm surprised your camera will actually let you take pictures without a card! While we were building our new home, there were several times that we went over there with my camera, only to find out that I left the card at home! You had to have been disappointed, but at least you got a few pics. And my oh my, those men had some handsome - er - swords. Hahaha!

We have this fair on the south side of Atlanta. I have always wanted to attend.
Cool photos, Ann! Glad you had a back-up.:)

That's too bad you missed some photos but the ones you did get are great! Looks like a fun place and the costumes are fabulous! It'd be fun to dress like that and become someone else for a weekend.

I love the medieval fair! I think it would be fun to dress up too. But it's too hot!

Every once in a while I realize I shot some photos without the memory card and it is such a disappointment that can't be rectified! Happy you got some great shots with the other camera!

This type of fair would be so exciting for Abbey. She wishes she was born during this era. Don't think she would have enjoyed it quite as mush as she thinks.

It was a really special day you and Amanda spent together yesterday. You guys covered a lot of territory together :) Was she with you on this trip too?

Whoa!!! So fun! I love medieval stuffs! They really went all out to make that costumes. Check out the chain mail armor!

That looks like a really fun time! I have always wanted to go to one of those fairs, but I've never gone. I think it would be a hoot to dress up and go to one of these :)

I never take the memory card out of the camera! I always wanted to go to one of those renaissance fairs but never could anyone to go with me! Looks like fun.

The pictures you got are great Annie, I live in a small town where things like this are going on all the time. Festivals, parades and shows - I need to get my butt out there and enjoy some of these like you do! Yea, I'm gonna start doing that - you are my inspiration.

These pictures were good anyway! Love those outfits. I want to wear one around town just for kicks.

what a neat carnival/fair! love the pics!!!

Shocking things do happen especially if a person is super excited that he or she is easily inclined to forget important things. LOL
The good thing is that you still have some nice photos with you.

Anyways, that fair is superb. I thought you are going to buy a costume and show us your picture wearing it. Just saying.

Have a fantastic start of the week! :D

We have medieval fairs like that in Sweden too. But so far I haven't gotten my costume made!

Thanks for visiting my post about my new turquoise necklace and bracelet. I'm not finished with summer-colors yet, even if the fall garment collections are coming into the stores.

Congrats! You are first commenter again.

Had to go sign in my Entrecard account to do an EC-drop on your widget.
Thank you for telling us about not having your memory card in your camera. It really hurts to loose pictures!

You can sew your own costume. I have a pattern book of medieval costumes.

I have always wanted to go to one of those. I'm glad you had a great time.

There's got to be some serious irony involved in forgetting a memory card *grin*. Sounds exactly like something I would do :o)

Thank you M'lady, it was ice to go along. My Sony's tell me when I don't have a card or run out of memory.A bad moment to have left the card in the computer, I always have backups.

Very nice Ann. I think we have all done the memory card thing. Lucky you had the other camera with you. We have our fair in the Fall. I missed it the past two years. I swear I am going this year. Maybe I'll see if I can get some pattern from Anna and make our own costumes.
Great Pictures.

What a fun weekend outing. I'm guessing Duke didn't get to go? I didn't think so.

Have a terrific day Ann. My very best to Duke. :)

Hey, if they are in costume they should expect people to look! Interesting stuff.

With my new camera, I practically need to bring Radio Shack with me. It eats batteries like you would not believe. I'm constantly recharging batteries and bringing at least two sets with me daily.

These shots are great. It looks like you had a wonderful time. Love the costumes.

Seems like a pretty nice place to go... especially if you can go in costume too :D The guy in the middle is probably ashamed that he's in "tights" hehehehehe..

the thing about cameras... murphy's law always happens... :) glad you had 2 cameras with you. Happy Monday to you Ann.

I brought my camera this year to our local Ren Fest and my battery died about an hour into it. I had charged my spare battery up the night before but forgot to pack it.

You can actually set your camera to not take pictures without a memory card. you have to go through the menu to find it.

Your vendor shots are great. I love catching the unscripted moments most of all.

We think the pictures are terrific even if you did only have one camera. Some of those costumes are really great but like you, I would just enjoy the pictures or just seeing them. Glad you went to this event. It looks really interesting.
Have a great week.

Oh! I bet This was Fun!! Love all those costumes, and the belly painting! How fun!
Sorry about the camera problem...but These are Great!!
hughugs

Medieval fairs are so much fun! I love watching people walk around gnawing on giant turkey legs.

Donna, Oh it will let me, and it even flashes telling me that there's no card. I guess I was too excited to notice. They do have handsome swords don't they :)

Jean We've gone 3 times to this one, I really enjoy it

Beaded tail I've thought about doing the costume but the heat was killer and I can imagine melting in one of those outfits...lol

Reeni I agree, almost all of those women were carrying fans with them. I doubt that helped them much though

LDH I've thought it would have been kind of fun to live in that era too but then I realize all the conveniences we have now that would be so hard to live without.

vanilla seven some of the costumes are very elaborate. I overheard one of the vendors talking to some guy about the price we're talking big bucks

Grace I had just taken mine out the day before to download the pictures that were on it so I had an empty one for the day and totally forgot to put it back in.

Miawa I love going to any kind of festival, show, parade. you name it. Sometimes it's tough getting wade to agree to them though.

bossy betty I think you should, I bet you could get some great stories for the blog if you did . :)

roschelle it is, very fun.

junezach that's exactly what happened too. I was too darn excited :)

FishHawk, You should try to make it the next time one is near you, they are so much fun

Jen Very ironic isn't it....lol Now that you pointed that out, I can laugh about forgetting the card.

Out on the prairie my sony tells me too, I wasn't paying attention to it though...lol I had an extra card for my old camera but only one for the new one. Now I guess I'm going to have to get a spare for that. Of course they would have to take 2 different types of cards.

Russ well if you go I want to see pictures, especially if you make costumes.

Sandee no duke didn't go although they do allow dogs. I think I read that you have to fill out some paperwork in order to be allowed to take your dog

Sharkbytes that's what I thought too. If they don't want to be noticed then don't dress like that.

Anny lol I was thinking that perhaps the guy in the middle may have been there with the wrong lady...lol

Lenox knits, oh that had to have hurt too. It stinks when you get so excited about taking the pictures only to find out you can't

Marg I was very thankful that I took both cameras even though it was a pain lugging them both around. I was just hoping that the ones I got would be ok, sometimes with that camera I don't do so well

Donna I'm pretty sure that lady was doing henna tattoos. I thought about getting one :)

Crystal oh you should. they are so much fun

sallie some of them really get into the role too. even talking the part. They did have a feast that day but it was a little prices for us. Even the admission was a little high so we didn't go for the extra

Looks like you had a fun time and your pictures are great!!

Make your own custom it wouldn't be hard. Looks like a really fun day.

gayle I did have a good time, I always enjoy that

b boys mom it wouldn't be hard if I had the ambition to do it...lol I have thought about it believe me.