Some of you asked if I got anything good when I braved the snow to go shopping so today I thought I would share one of the things I bought.
One of the girls at work has a knifty knitter and had been talking about the hat and scarf she made with it. Being one who loves just about anything crafty I had to do some investigating to see what all you can do with this. I was impressed and have been wanting to get one ever since.
Instead of buying just one loom I bought the set that had 4 different ones 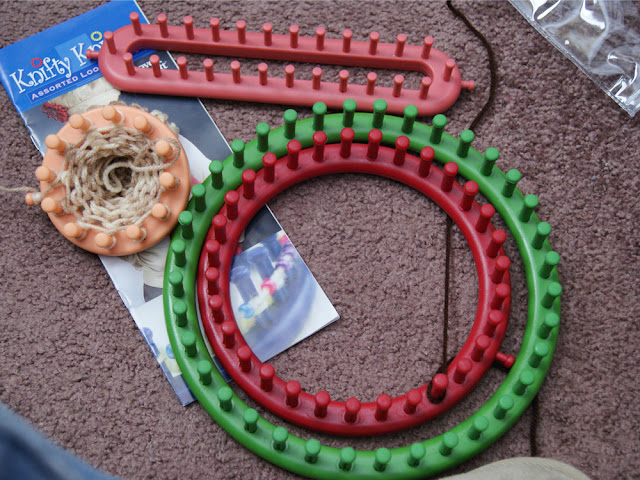 I haven't started on any specific project yet, I was just playing around so that I could figure it out.
It's pretty hard to see in the picture but I used the long loom and made a sqare using brown yarn. Then I sewed up the side and gathered up one end. It looked to  me like a little hat. Duke was not impressed. He thought it was just too small. 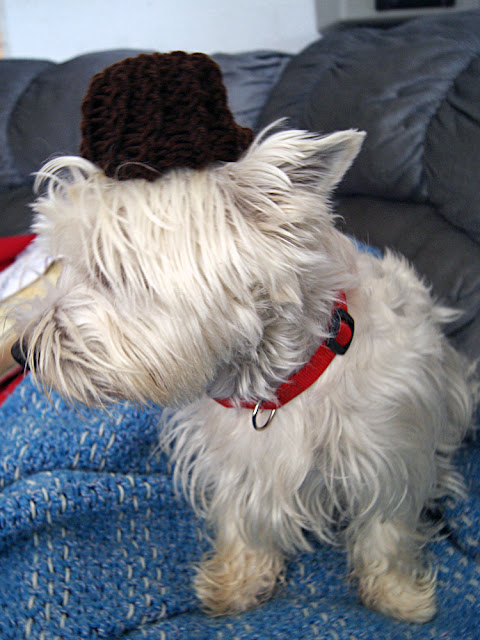 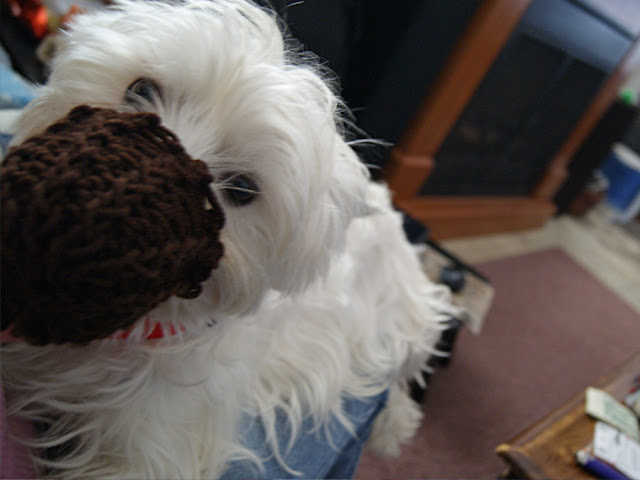 Just look at those pleading eyes. He's hoping that all future work is made in larger sizes so that he's not forced to model.
Posted by Ann at 7:00 PM

Love this new hobby, but obviously more than poor Duke.I had that lap quilt made, a friend is new at it, and I saw lots at the craft shows.Had another for my grandaughter made also. My critters are using it more than me.

What a cool purchase but I've a feeling that Duke is going to hide every time you bring that out to make something. He really doesn't looked pleased at all.

Have a terrific day. My very best to Duke. Your personal mannequin. Poor little guy. :)

Oh, oh, oh! Big spool knitting! Did you used to do that in Scouts?

Poor Duke!! Look at how unhappy he is with his little ears lowered. :(
It's hard to be a supermodel, Duke!

Oh no! Poor Duke, I can see it all now...the knitting model. I can't believe he let you put that hing on hos nose! He surely is a good sport! ;D

This issssss a lotta fun. I'm sure everyone in the house will be hatted soon.. Wade included.. (i hope he knows that) hehehhee. I am sure this will keep you occupied until the next excursion out in the snow :)

Poor Duke ~ such an obedient model. I hope he got some extra treats for that! :)
xo Catherine

Lol Duke is a great model. You make me smile everytime I visit.

Duke, we hope you got lots of treats for having to endure that modeling session!

That looks easy enough that even I might be able to make something.
That muzzle warmer cracked me up!! Too funny!

Now that looks something I could actually do - maybe - if I had the patience...

Oh, poor Duke!! Forced to be a model for your new loom. Run, Duke, run, ha ha!! Thanks for showing what you bought, this is really cool! I'm glad you got the whole set, too. I hope you show us whenever you make anything! When I learned to knit as a teenager, I made a tiny cone shaped nosewarmer with loops to go around the ears. No pattern, just in my strange mind.

Duke is such a patient assistent! Looks like a fun way of knitting!

Thanks for visiting and commenting on my posts about Etsy treasuries.
You're a doll, Ann!

With the change of just two letters "knifty" becomes "knotty," which is what I would end up with if I tried any of that. Begrudgingly, I must admit that Duke's little hat/muzzle warmer is rather cute. Sorry, Duke.

I love all crafty stuff too! Those looms remind me of something similar I had as a child. I loved it! So many things you can do.
Yeah, Duke's face says is all ;-)

Hahahahahaha - poor Duke (oh the shame of it :o) That thick and quick stuff and the chunky yarn makes for some great hats. Have fun!

adorable, precious, sweet that is all about Duke. the new contraption is cool, it would push me over the edge since i have no patience at all. looks like it made a nice little muzzle or hat or what ever. have fun, we are waiting to see what else you create.

This sure looks like fun. Can anyone knit with it? I don't know how to knit but would love to. Duke as always looks cute in this little hat or nose cover.

I have looked at that set in the store. Contemplated it and still have not bought one.

Your poor dog has a knitted muzzle! LOL

Okay now... this brought back memories. I was certain that I would actually become a knitter when I purchased one of these! Not! But not because of it... alas, because of me! Let's face it, knitting is a talent!!
Looking forward to seeing your next knifty knitter project!
Ann

I bought the package with the rounds. Everyone got hats:)

Those looms look like a lot of fun. I want a set. I don't think Duke is too pleased with the end product though. He is a good sport nevertheless.

Hey these look really cool...I have never heard of them before. Are they easy to master?? It would be a great thing to maybe do with the kids if it's quite simple as they are struggling a little with the needles!

Oh Duke, that Mom shouldn't do that to you. What a good boy you are to sport that muzzle warmer. Bet it didn't stay on there long.
Those looms look really neat. I bet our Mom could do that but then she would make us wear strange things. WE want to know if it easy to do stuff on them. Take care and have a good evening.

out on the prairie yeah Duke's not real impressed. I've got to try that quilt thing, one of my goals for the year :)

sandee no he wasn't pleased at all...lol

Lin the indignity of it all

Julie the funny thing is he sat there with it on his nose for a while but when I pulled out the camera he wouldn't leave it on. I had to hold it on him

anny yep, hats for everyone and scarves too

catherine oh yes, extra treats were required for this

country mouse studio so far I'm impressed with how easy it is to use.

beebeebabs duke is glad he can make you smile, that makes his day

beaded tail he says he needs to negotiate his contract

tahtimbo it is incredibly easy. the muzzle warmer cracked me up too but my husband just rolled his eyes at me

grace oh I'm sure you could

fishhawk, I thought it was cute too, Duke and Wade didn't agree

duni I just can't seem to focus on one thing. I just love to make stuff no matter what it is.

philippa it sure is. I can't wait to see how much I can really do with it

Jen I'll keep that in mind. I think next year for Christmas everyone is getting hats and scarves

sandra oh I always have fun when I'm in the crafty mood. I'm like a kid in a toy store

russ well get yourself a loom and knit away. it is really easy to do

b boys mom I think it's easy enough that yes anyone can knit with it. I tried to learn to knit once and couldn't get the hang of it but this is super easy to do

Ann, well I don't know how creative I can really get with it but to make hats and scarves it's pretty simple

Leeuna they are fun. something to keep my hands busy too while sitting in front of the tv

allotments4you VERY easy. just wrap the yarn around the pegs twice and pull the bottom loop over the top loop.

the old geezer I thought so too, he says he's not wearing it again though

marg no not long at all. as soon as the shutter went off on the camera the warmer came off the muzzle

Just think of all the fun things you can make Duke!

gayle, I saw a pattern for a dog sweater and that's what convinced me to finally buy one

Duke does look so cute! It's that 'what are you doing to me now mom?' expression that does it!
Jille x