Where did that come from

Duke was a little confused and surprised when he walked through the living room the other day. 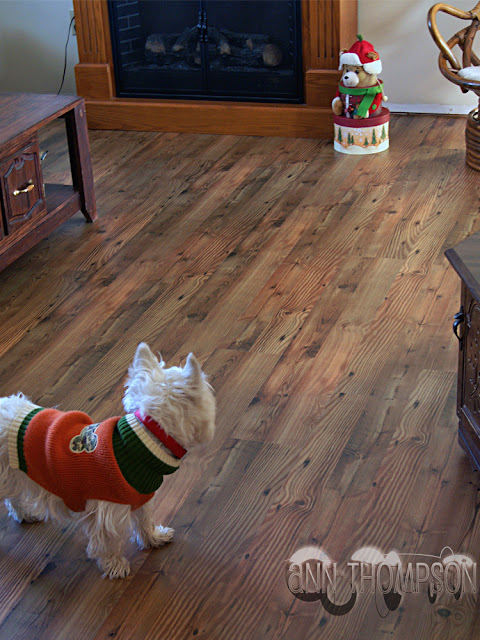 Is that a fireplace?
Yes, it is, sort of. It's not a real wood burning fireplace but it is an electric one. Not much good for giving off heat but it looks nice and I like to watch the flames even if they aren't real.
We've had this in the basement in the "man cave". Since the living room is almost finished, Wade wants to start working on the room in the basement that has never really fully developed into a room. He lovingly refers to it as his man cave and it's probably the most used room in the house. Any way, before he starts ripping things out he wanted to get the fireplace out of the way and moved it in to the living room. 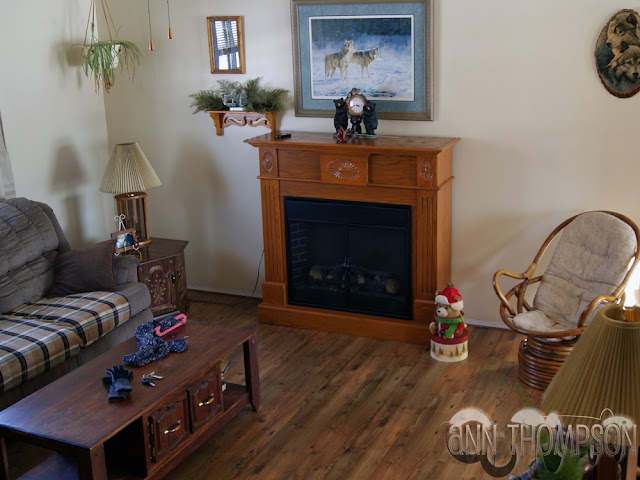 I asked him if he realized that I'm not going to want him to move it back down stairs when he's finished with the cave. He agreed that it does look nice there. Now all we need to do is decide on a rug and buy the molding and then this should be done. Now if I could just stop dreaming about a new couch.
Posted by Ann at 7:00 PM

The fireplace looks great, and so does your living room. I'm sure Duke likes it :)

Have a terrific day. My very best to little cutie pie Duke. :)

Gosh, it looks like it just belongs there. I think it found its spot.

looks good.. it should stay there...I like looking at the flames as well

The fireplace is very nice.. it sure completes the living room. And here i was thinking that the new addition was the bear on the box.. hehehhehe.. silly me. My love to Duke!

The fireplace looks nice! And Duke is so smart! Moon notices when we do things like that too.

It looks great and that Duke is such an observant little bugger isn't he.

I never liked fireplaces - grew up with a wood burning one which was well used - I was more taken by the bear clock and the photos of the Huskies..

The fireplace looks really good there. Home remodeling is never done is it? One thing leads to another!

Oh, I've been wanting one of these for a long time! They are so pretty, and none of the mess of the wood burning ones. It looks perfect there, it was MEANT for that space, you cannot move it!!! It just makes the room, along with the floor!!

I would love to get one of those. I heard the ones the Amish make the mantles/frames for are really good.
Your living room really looks great! You all did a super job!

Love the fireplace. It fits in perfectly....I'm sure Wade will enjoy having the extra space in the man cave!

When I first saw the picture, I thought that it may have been the Christmas Bear that caught his attention. For they almost have matching outfits on.

No...carry on dreaming about the new...ultra comfy couch to curl up on whilst watching the dancing flames of your new permanent fire....Just wait for the rug...lol

That's a good-looking fireplace and fits in perfectly in your beautiful living room!

Ann I dare him to try to take it out of there now. It looks great and I think Duke likes it also.
Have a good weekend.

That looks so nice there! Even though it is not real, your fireplace beats our fireplace television video any day!

It looks very good and it adds to the warmth of your room.

it looks really nice there, i vote keep it there and not in the man cave, it looks like duke likes it to. our sofas are 6 years old and we looked until we made ourselves crazy so be prepared if you decide to look on taking a lot of time finding what you want that fits

Oh, I like how it looks up there too! Maybe he can get one of those red cardboard ones for the man-cave if he misses this one too much.

I have a small one that looks like a franklin stove. My dog barks at her reflection occasionally.If i ever get the email back I have some exciting art work to share.

If it were Me, he'd Never get it back! Looks great right There!
Happy weekend!!
hughugs

I wouldn't give it back either :) Duke looks like he wants you to turn it on so he can snuggle up in front of it!

yep,it looks good there, don't let him take it

I am always dreaming of a new sofa and new coffee table--one day we will get our wish!

Sandee I can get hypnotized watching the flames of a fire some times...lol

sharkybytes that's what Wade said too

livintheblues I think so too

anny doesn't it though. you weren't completely off, the bear is new too

reeni can't get anything past duke :)

grace we had 3 fireplaces when I was a kid and one was never used. It was all white brick and my parents didn't want the brick to get ruined. The other we used frequently. I can remember roasting hot dogs with my dad in the fireplace.

beaded tail so I've noticed. the minute you do one thing you notice that now something else needs done

ginny I still would prefer a real one but this one will do.

tahtimbo I've read about those Amish made mantels, I thought about one of those for a while actually and then we found a great deal on this one

marie I thought so too. He'll find something else to put in that spot I'm sure

allotments4you well alright then, I think I will. I like the way you think :)

karen well yours probably has the cool crackling sound, mine doesn't...lol

catherine I agree. I thought if I left the Christmas decorations out it would make it easier next year to get ready for the holidays :)

Sandra oh I'm sure it will take me forever to decide on what I want.

Lin LOL, I think I have some cardboard around I could even make him one

out on the prairie well I hope you get the email back soon, I can't wait to see

donna well that's the plan and luckily he does agree :)

dss good thing duke doesn't know that Louis has one that gives off real heat...lol

country mouse studio thanks, not going to

erika wouldn't it be fun to go out and buy all new furniture all at once.

do take a picture with the fire going! =)

Yuenie, funny you should say that I just did that today.