Thanks to Duke wanting to snitch on me for not giving him any bacon yesterday I'm a day late with the second part of my weekend report. He's so spoiled. What he didn't tell you was I gave him double treats since he didn't get any of my breakfast. I was seriously only thinking of his health here. I didn't want him to have all that grease that could clog his little white westie arteries.
That's my defense and now on to the rest of my weekend.
I started out much the same as Saturday with the hot coffee and the laptop. I just love it when I can casually cruise through the early morning hours reading blogs and sipping coffee.
After breakfast I went for the Wii workout.
I haven't played with a hoola hoop in years so imagine how much fun I had when I discovered that it was going to be part of my workout. 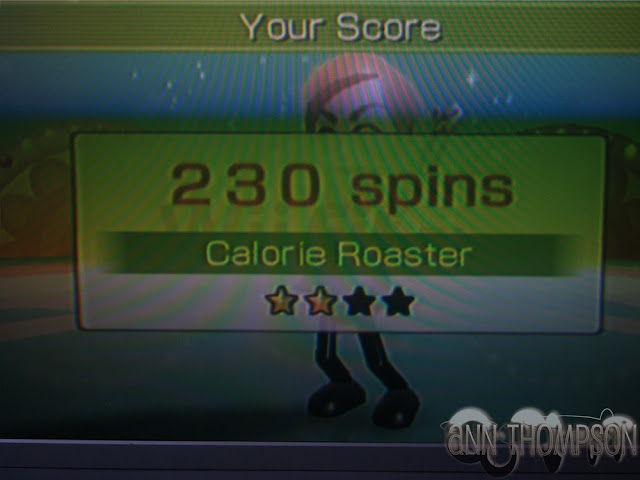 Ok so maybe 230 spins isn't so good but this was the first time I tried it and I did do better the second time. I think I was spinning 6 hoops at once. I was giggling through the whole thing. 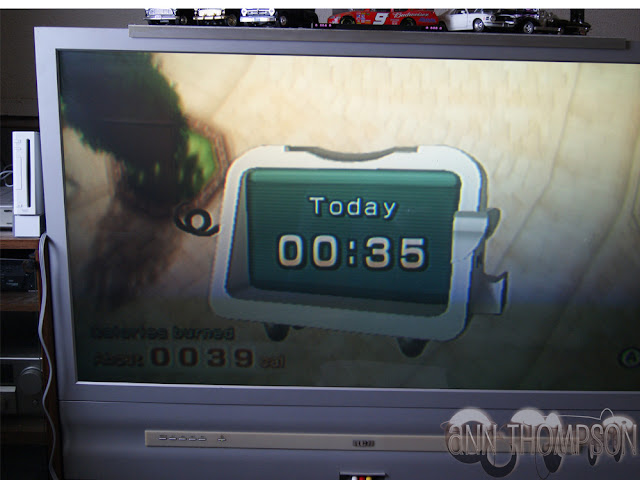 I actually spent more time than this on it today because after I took this picture I went in and customized my workout and then went through it.
I also played a little super Mario.
I tried to do some crafting but the only thing I accomplished there was making a big mess. I guess it's just not there right now.
I pulled out the camera when I spotted a ton of birds in the backyard. I'll save them for tomorrow though.
Posted by Ann at 7:00 PM

Tell Duke I'm still on his side about him not getting any bacon. Just saying.

Looks like you had a great workout. Anytime your are moving it's a good thing.

Have a terrific day. My very best to Duke. :)

Seconds or minutes on that count.LOL I would like to give it a try, hooping for cardio sounds a bit fun.

Super Mario- I like it! I'm no good at it though

Duke didn't get any bacon. What is with that deal. Duke, you need to go on strike. We are glad to hear that you got some extra treats though. Maybe that makes up for no bacon but next time. We are just saying.

Well at least Duke got double treats! The Wii hula hoop thing is pretty fun and can really be quite the workout. It's hard to hula hoop without a hula hoop!

Santa gave my granddaughter a Wii and she beat me on every game we played. It was a great workout but...the shame that a 6 year old kicked my ass.
I really like your new look!
Hugs to you and Duke!

O.K. Duke did trick me into sympathizing with him over the bacon, but what choice did I have, he is just TOO cute! You are a good Mommie, not a mean bacon snatcher! The hoop!! Before we met, I did two posts on it. I was the Hoop queen as a kid! I even spun it around me neck, with my mom yelling to me to stop or I would break my neck. I just recently tried it, and can't do it!! A crowd of amazed people gathered in the store to watch me. Now you would think since I have hips now, I could hoop even better. Not so!! I have definately lost the jiggle in my wiggle!

great weekend..the Wii is fun unless there is a youngster around cause they usually clean my clock..:)

The wii is so much fun isn't it? I have my sparkly ball in bowling! :)

Sometimes you just have to be in the right mood to craft ~ no? You can't force creativeness I don't think.

I am looking forward to your bird photos Ann!

I want one of them Wii thingies - just as soon as mu husband moves his office out of the living room!

That's better than I ever did with a real hula hoop. I would love to get that Wii Fit. It would be so much more fun than just walking on my Nordic Track and staring out the window.

With Duke plotting his revenge, were the birds buzzards?

I am sure Duke was happy with the double treats. We play the WII a lot around here.I was just given a new game for Christmas. Dangerous Hunters. Duke would most likely like it better than the ladies. A boy thing.Especially when the bear gets you.
Getting ready for more snow over here tonight. Strange forecast 8 to 18 inches. They are really covering themselves.
Looking forward to the bird pictures.

your post made me smile all the way through and i like smiling. your day sounds perfect to me. and my morning always includes sipping coffee and reading blogs, unless i am out and about. blogging is sooooo fun. thanks for the smiles

I love the Wii Hula Hooping! I am just glad no one takes a video of me while I am doing it!

Sometimes a girl just wants to have Fun!! Sounds like you Did!
Good!
hughugs

Sandee Duke will appreciate the support

out on the prairie believe it or not those were minutes...lol

sharkbytes I'm not too good either

marg it should make up for it :)

beaded tail it is quite a workout, I was surprised

jean kids seem to be so much better at that stuff, it's almost embarrassing but it's still fun

ginny I'll let you you slide on the Duke deal..lol I think I'm better at Wii hoop than I ever was at the real thing.

livintheblues it is fun I'm enjoying it so far

catherine it sure is. I gotta get one of those sparkly balls. Yes I think you do need to be in the right mood, just wish I could get tehre.

grace I've been wanting one for a while now, I'm so glad my husband listened..lol

tahtimbo same here. It doesn't even feel like exercise to me, it's too much fun

fishhawk you'll just have to wait and see

russ I just wish I could get my husband to join in more. We're getting snow right now, quite a lot from what I hear

sandra glad I could provide the smile. I wish I could ALWAYS start my mornings that way

bossy betty oh I hear ya, no one will ever see me hula hoop except duke and wade

donna you are so right

A girl after my own heart....wii fit and Mario...you certainly can't beat them!!

I think part of the workout on the Wii is laughing. I know I laugh at myself a lot when I'm on it.

allotments4you well you could try but it would be pretty hard to beat...lol

b boys mom so I'm finding out. I was doing the run the other day and found myself yelling at that girl that kept turning around and waving at me...lol