Have you ever played that arcade game Whack a Mole? Well I saw a version of it going on in my front yard the other day. To be more accurate, it was Whack a Squirrel.
You see the squirrels have a little tunnel system going in the snow. I was looking out the window and happened to see a little squirrel head pop up and then go back down. 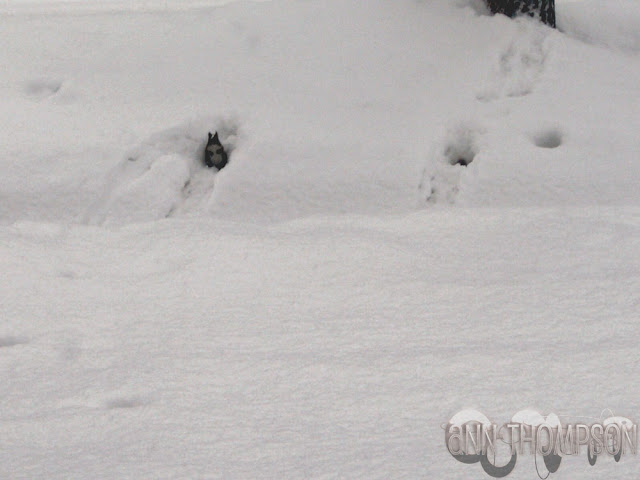 As I watched it appeared in another spot and then went back down. Then there were two of them. I was laughing hysterically and yelled to Wade that there was a game of Whack a Mole going on in the front yard. 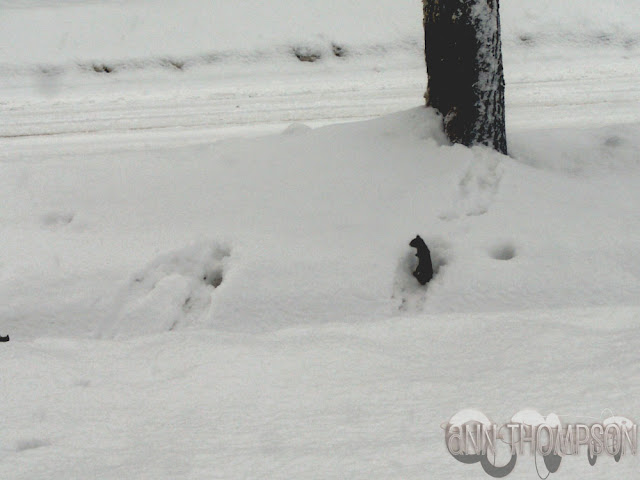 In this third picture you can see the tail from one squirrel as it's going back down in the hole and near the back you can see just the tip of another ones head. 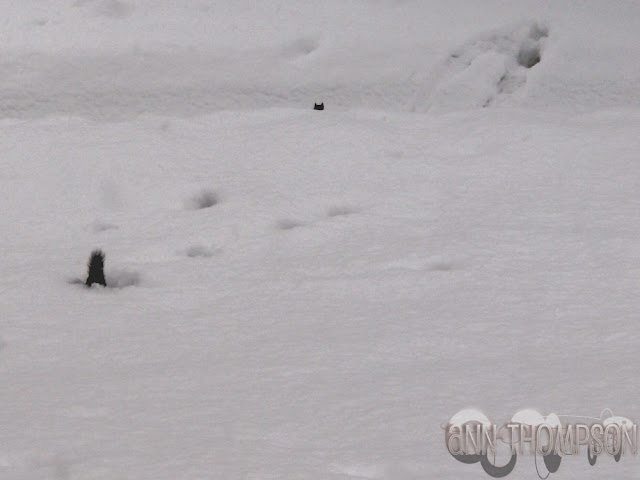 And that was my cheap entertainment for the weekend. 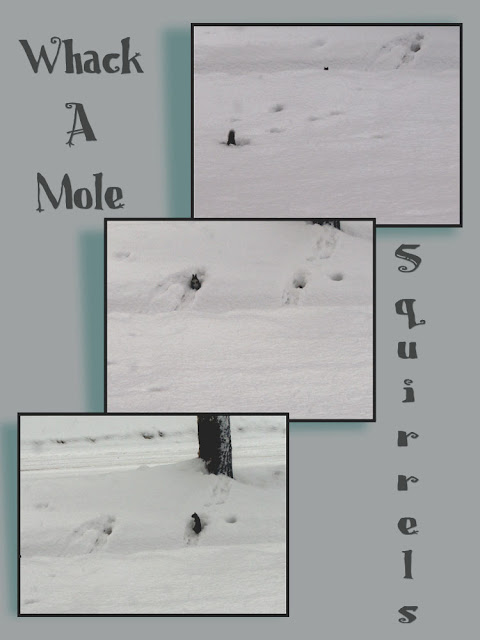 How funny is that! Those little guys were so entertaining! I sometimes get the urge to whack a squirrel ~ right off of the bird feeders. Wouldn't help though. They are resilient little creatures and way to creative.

That is so awesome! It would totally drive my dog insane. He loves to try to chase the squirrels.

That is funny! I would have been watching too.

That is too funny! And your presentation is perfect!

That's hilarious! Nature is the best kind of entertainment sometimes!

Very amusing! I just posted a photo of a squirrel that was running along the top of a fence - sometimes they can be very cute.

Well squirrels are fun to watch anytime of the year. They just can't stay still. How adorable. I'd have been watching them too.

How cute! But shouldn't that wee squirrel be sleeping ~ what's he doing running around in the snow????
xo Catherine

Oh this is just a scream!!!! You are so lucky to have seen it! My husband is in the other room looking and laughing now! Glad you didn't actually whack any!!

Well Ann - I have never heard of such a game ........... but it's lovely to see the squirrels. They have all begun to sound like ducks in my area as for some reason they quack at each other. Do they do that around your area too? They make the noise very loudly and unless they are in sight you become convinced there is a duck somewhere about - it's amazing.
Does anyone know why they do it? Whether both sexes make the quacking sound or have I just got funny squirrels here in Worcestershire??

Oh, that is soooo funny!! Isn't it funny what happens when the rest of the world isn't really paying attention? :)

I find nature and watching their daily lives so relaxing and serene. What a wonderful way to spend a few minutes to enjoy the wonders of life. Thank you so much for sharing...God Bless Patricia

Oh My...LOL and LOL for a few more minutes! Super funny nature post. You should share it on one of those Animal TV shows!

Our Trixie would push the window out if she ever saw something like that going on in HER yard, and the rest of our pups would certainly cheer her on. Do you think Duke would come by and give them a little talk? We have bacon.

That is so funny! Glad the squirrels were there to entertain you! I haven't seen any squirrels around here lately, but I do enjoy the birds that stop by our bird feeder.
They can be fun to watch too!

Oh how funny! You know, that one photo of the two of them (head/tail) almost looks like it could be a ridiculously elongated squirrel. Maybe you should tout it as an amazing new scientific discovery in the animal kingdom:
Squirrelous Limosinous Stretchous
Betcha somebody would think it was real :o)

smiling and feeling a little tiny bit of envy here. i would love to have seen this. adorable and what a free fun time. nature is the best of free entertainment and you got a lot of it. you did a super job of catching it for us to see

Lol...hits is the sort of thing that would have got you £250 in the UK if you could have filmed it!!!

Incidentally my knifty knitters have come so i shall be having a go with them later on tonight.. :-)

I have never seen them tunnel, that's wild.Mice and voles tunnel a lot.

That is really cool. They really were playing that game. Good job getting their picture. They must have been reading the internet about the game. Hope you are staying warm. Hugs to Duke.

LDH they sure are entertaining. made me laugh

anne duke doesn't really pay much attention to them

donna better than anything on tv

beaded tail it sure is, that and the dog :)

alan I loved your shot of the squirrel

sandee no they sure can't always on the move

catherine you would think, I always thought they hibernated

ginny I never was quick enough with that game anyway...lol

kloggers I didn't know they made that kind of noise. I've never heard any sound from the ones around here

lin it sure is

fishhawk.for bacon duke would probably do anything

philippa thanks, I can always count on the animals to help me out with the blogging

jen LOL that would be a cool discovery, maybe it could make me millions before anyone figured out it was a scam

sandra well in order to get the entertainment I have to take the snow along with it.

allotments4you I wish I would have had the video camera for this. Can't wait to hear what you think of the knifty knitter

marg yes they were and I think they were enjoying it too. Staying warm isn't easy but we're trying

LOL that is so funny! Good pictures..did Duke see them? Cheap entertainment if you ask me. Glad I am not a squirrel and have to live there, ;D

That is so funny! I love the fact that you made a card out of those pictures!
They seem to be getting closer and closer to the house. I think I would be getting Duke ready to offer his protective services, if needed :)

Julie he doesn't pay much attention to them.

tahtimbo they are a little close, I just hope they don't decide to move in

tammy hee hee, I thought so

Ann, I just looked at this today. Very funny post! Squirrels are so darn cute!